To celebrate the upcoming release of my new SF novel, Sparks
in Cosmic Dust (September 26, 2011, Carina Press), I’ll be posting a five-part look at the book’s development, from initial concept to book launch. I’ll also be giving away one SF title from my back catalogue with each segment, ending with a special Sparks giveaway. The winners will be all announced on release day on my own blog:  http://robertbappleton.blogspot.com

Check there over the coming weeks for details of where to find the other installments.

In the beginning, there was…procrastination. I’d just made my first sale to Carina Press—a steampunk mystery novella—and I was feeling pretty damn cocky. Okay, invincible. I could face down a matrix chock full of Agent Smiths and look cool doing it. Without a concrete project in the works, I had my choice of dozens of dream novels to start. Those long-delayed masterpieces every author cycles through from time to time like rosary beads greased between itchy fingers. The books you’re dying to write but are also s#!%-scared of messing up.

Sparks in Cosmic Dust was not one of those projects. Like its title suggests,
it just happened.

One can liken writing a novel to the expansion and collapse of a small universe. That might sound grandiose—it’s only one book, dude—but it’s apt for science fiction, a genre that espouses the idea of relativity (your doorstop is my life’s work) and it’s also an accurate metaphor for the life of a book’s concept. By the time the project’s over, you’ve grown it from a single-line concept to a ninety-thousand-word epic, then shrunk it back to a single-line marketing blurb.

There might be a lot of build-up to the initial explosion. A gathering of inklings, intuitions, market trends, personal fantasies. You’re often not aware of those nebulous stirrings in the stellar nursery. But they collect in the right proportions one day and you might feel a spark, glimpse an opening into your creativity that says, “Yeah, you can take this path, pal. It’s no picnic, but your muse has agreed to tag along if you’ll be nice to her and buy her chocolates.”

In my case, the spark was a movie. John Huston’s The Treasure of the Sierra Madre, starring Humphrey Bogart, Walter Huston and Tim Holt, is one of the great Hollywood films of the Golden Age. It’s about three homeless guys who go prospecting for gold in the Sierra Madre mountains. They’re on a shoestring budget, miles from civilization; and bit by bit, despite their vow to not let greed get the best of them, it eats away at their fellowship. The older man has seen it all before and knows the signs, but even he can’t stop the soul-destroying rot in the camp. One man in particular (Bogart’s Fred C. Dobbs) succumbs to paranoia and murderous designs. He’s no longer a part of the group, or even humanity—he’s in his own private hell, a gilded cage from where he sees only enemies and competition for his fortune. 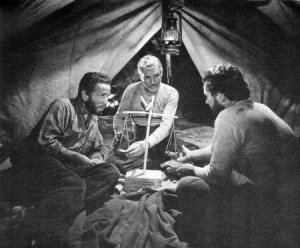 It’s a chilling story, brilliantly told. And though I’d seen it countless times before, it suddenly struck me how great this scenario could be in a deep space setting. Somewhere even more isolated, hostile, unforgiving. Beyond the outposts of man’s farthest exploration.

At the start of the movie, the characters are holed up in a two-bit dive in a Mexican border town. Inventing a science fiction equivalent—the asteroid colony Kappa Max—was probably the most crucial part of the novel I eventually wrote. And I wanted a female protagonist in my story, a drifter heroine not born to that down-and-dirty way of life, who must change in fundamental ways over the course of the story. More on her and the other four characters in Part 2, but I think the concept for Sparks in Cosmic Dust was really born out of my damaged heroine trying to find her place in the universe, and having to survive an expedition she’s in no way equipped to handle.

The idea of a used-future is also a bedrock concept in the novel. Our prospectors have to beg, borrow and steal to fund this expedition, and their budget is so limited, their supplies aren’t much better than the rations and tools available in the Old West. In many ways, Sparks is a frontier western set in deep space, with aliens, spaceships, treasure, and lots and lots of baked beans.

“Light-years from her home, heading in the wrong direction. At a time when people were migrating back toward the inner colonies, it seemed crazy to be blazing a trail to the unknown.”

By the time the project was over, I’d grown it from a single-line concept to a ninety-thousand-word epic, then shrunk it back to a single-line marketing blurb. Concept book-ends any story you want to sell. But the story has to live up to that concept, and that’s no easy task…

With this first installment, I’m giving away an ebook copy of my SF novella The Mythmakers (Samhain, 2010). To enter, simply send an email to  sevenmercury7@aol.com   with SPARKS GIVEAWAY ONE in the subject line. Don’t forget to give your name.

Thanks and Good Luck!

← Would an alien be a person?
Get your robots on sale, here! →
We're speculative fiction authors of a wide variety of genres: Science Fiction, Fantasy, Space Opera, Romance, Steampunk, Cyberpunk, LGBT, Post-apocalyptic, Horror, Supernatural, and more.

Our thoughts on science fiction